You are here: Home › True experience of a reader with Om Namah Shivay 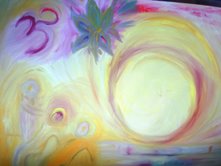 A symbolic drawing of Mantra

This real life story was sent to me by one Mr Dieter Schmitt Eiden. It’s really inspiring and thought provoking. Enjoy it !

“I was joining a job with a Danish tour operator in Sri Lanka in 1980.
Usually my coach with 48 guests onboard went during a 7- days roundtrip around the beautiful island.

One day while we were joining one of those trips we stepped into a small temple that wasn’t in our program.

I liked the place personally very much because it was too small to visit it with a large amount of tourists and I had seen before that the place was a very religious spot for the natives living around there. I could not even find out if the place is Buddhism or Hindu.
I asked my clients just have a look into the small room there but not to disturb the calm and peaceful atmosphere of praying people.

In front of a Buddha’s image there were a large collection of donations to see like a little radio, plastic flowers, small figures, vases, boxes, glasses and pots, even one with fresh smelling rice next to candles and incense.

I observed chicken and ducks picking on the floor but they did not harm to anyone.
There was only that special feeling in me that made me come back to this temple whenever I was near.

Three men were lying there on the ground in front of the Buddha praying with their deep voices: Om namah shivay, again and again this song and it seamed they did not breath. I didn’t really understand but the bass sounds went into my brains forever.”

21 years later far away from Asia I got a book about Babaji of Haidakhan, India who was convinced that all religions are one. I got impressed about his explanations of the om namah shivay- praying and its powerful meaning. Babaji also mentioned the scene I was honoured to see just a few steps far in front of mine. And after reading his book I got the courage to talk about it and today I can write it down here.

“One of the three praying men, the one in the middle, became up to his feet, he was pale and had problems to breath. Immediately those two men on both sides got aware of the sickness of the first and they tried to help him standing upright. Then happened something so unbelievable that I couldn’t talk about for years because I didn’t understand.

The pale man was watching straight to the wall with the Buddha’s image while smoke got up out of his scalp and the smell of burned meat spread in the air. A perfect flame was seeing over his head and then he broke down to the floor, the other men let him slide down to rest. I only realised that a large 3 with a little tail had been burned into his scalp.

It was simply too much to believe what I saw.
We were asked to go out of the temple and it made me more comfortable to walk out there. I could not explain to my clients what they had seen also.”

*****
++ Babaji gave me the response years later when he described the possible delighting of a human being after praying the om namah shivay for many times.

God brand marked the God-sign ‘om’ into the scalp of that man and I had no doubts that this really had happened there.