You are here: Home › Soham Meditation: The natural mantra which repeats itself

The natural mantra – Soham  (Pronounced as So’ Hum’) 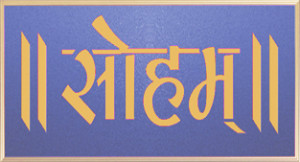 A mantra which repeats itself in all of us ! This the the natural mantra – Soham .

Till now I have told you about those mantra which  are required to repeated by the meditator. Now, I’ll tell you about a mantra which is not needed to be repeated – because it is continuously repeating itself on its own – in all of us. This mantra is  So’ham – the natural mantra, the mantra of your true self. It does not belong to the East or the West or to any religion.

So’ham  is the inherent in everybody, in all of us; it repeats itself continually, along with our breathing. It is said that as long as this mantra keeps going on inside us, there is life in the body. As soon as it stops, we are no more.

Let us learn about ‘So’ham’ in some more detail :

[ A clarification before you read further : : Of late I have been getting emails from various readers who say that what is described above has confused them. They have learn/read something  different about So’ham in other organizations/websites.

Well to be honest I don’t know why the description at my website is different from other sites. The source from where I learnt this technique had described the sound of  inhalation/exhalation in the same way as I have written here. And to me, it’s seem very natural explanation as whenever I meditate using So’ham I get this feeling that my exhalation is producing the sound ‘So’ and inhalation the sound ‘ham’.

I also want to share something about my source. You all should read this letter from Swami Muktananada to Franklin Jones (in 1968)  wherein he has discussed in detail about the So’ham Mantra.

I have also observed that it is very easy to shift from one belief to another. Since I was connecting the first syllable (‘So’) with the second process of breathing, it was just a belief of my subconscious mind. I did a little practice and link the ‘So’ with inhalation and ham with the exhalation. It’s easy

For those of you who are confused over this let me suggest something.

So’ham is also known as Hamsa mantra. So’ham and Hamsa are the same mantra; the order of the syllables is simply reversed. An ancient Indian Sanskrit text “Shiva Sutra Vimarshini’ (commentary by Kshemraja) at III.27 says ” The breath is exhaled with the sound Sa and inhaled again with the sound ham. Therefore, the empirical individual always repeats the mantra Hamsa. (or Ham’So)

Having said that I want to reiterate  that you  should be your own decision maker. We all have to be our own light in this path of spirituality. Take your own time, research a bit if you want, consult others and choose the path most suitable to you. We all are different. So are our needs and opinions. ]

Every time the breath goes out and comes in, one repetition of the So’ham mantra takes place. Whether one is a Christian, a Jew, a Hindu  or a Musilm, one repeats this mantra unconsciously thousands and thousands of times every day.

The meaning of So’ham is “I am That”. Through these two syllables, we contemplate our oneness with the supreme consciousness. Through the ever going process of breathing, our ‘self’ keeps repeating this mantra –  I am that.

The heart is considered as the source of So’ham. It is from the heart that the syllables of ‘So’ and ‘Ham’ arise, and again in the heart that they subside. If you observe your breath, you will notice that it arises from within with the sound So’, goes out of the body to a distance of about twelve fingers, and dissolves there. A fraction of a second later, the inhalation arises with the sound ham and goes back into the body. It merges in the heart for a split second and then arise again in the form of ‘So.

Between the inhalation and the exhalation, and between the exhalation and inhalation, there is a fraction of second which is absolutely still and free of thoughts.( It is the same moment of pause that I explained in Pause breath method of Deep Breathing)  . That space is the space of the truth. When you breath in and out, listening the ham  and so, you should focus on that space for as long as it lasts. As you practise the technique, the space will gradually expand.

Observing the So’ham is a natural Sadhana, a natural yoga. It is known as ajapa-japa, the unrepeated mantra repetition. Since So’ham goes on within you all the time, you do not have to make an effort to repeat it. All you have to do is become aware of it. You do not need any faith. You just have to watch the space of truth.

Since this technique is very subtle, you have to practise it for a while in order to understand it. Whenever you sit quietly, follow your breath and listen to the mantra. If you do not immediately become aware that the mantra (So’ham) is repeating itself, you can repeat the syllables along with your breathing. (So’ during exhalation and ham’ during inhalation).  In a few days you will be able to synchronize the mantra with your breath. Soon you will begin to hear the mantra naturally. If you practice it for a while, you will experience the self.

The practice of So’ham is recommended in the Upanishads and the Vedas. It has been said about So’ham that :

Watch the So’ham. Those who contemplate So’ ham ceaselessly, discarding worldly entanglements, they attain the supreme state and their worldly bondage is destroyed.

While repeating So’ham, keep in mind that the goal and practice of So’ ham are the same. So’ ham means “I am that,” and if you practise it with complete concentration, being aware of the breath coming in and going out, you will experience That (which is nothing but your true self). The truth is that you do not really have to practise it, because you are already That.

The practise of So’ ham is a matter of understanding. You are not required to repeat it . It is already going on in you. You have to just watch and listen it. Just watch the breathing process, listen the So’ham and realize the true self present in you which always says ‘I am that’

: An independent view on Transcendental Meditation

Mantra Meditation : The power of repetition of sound

How to use mantra meditation in a busy & complex life

Some Mantras for Meditation

What is NOT Meditation

Failure in meditation :
A detailed analysis

Perception Meditation This too will pass

Trataka – The Meditation of third eye