You are here: Home › Bhagavad Gita: Cosmic play of God

Bhagavad-Gita – the most revered and  inspiring spiritual book of Hindu religion. The dialogue between Lord Krishna and Arjuna on the battleground of Kurukshetra has contained the wisdom of highest standard. 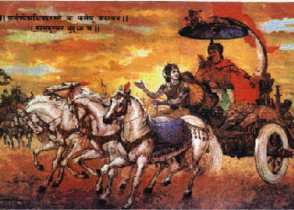 For thousands of years, millions of souls have found solace in the pages of this immortal master-piece.

There have been many excellent commentaries on Gita by various men of talent and wisdom. In this article, instead of going into the verse by verse analysis of this book, some of the most important lessons, which this amazing book teaches us, have been explained.:-

“No matter what conditions you encounter in life, your right is only to the works–not to the fruits thereof. You should not be impelled to act for selfish reasons, nor should you be attached to inaction.” Bhagavad Gita 2.47

The whole world is a cosmic play. It is a movie written, directed and acted upon by God alone. In our ignorance we consider ourselves as the doer of the deeds, but in reality it is God through which everything is being done. All that is happening, had happened or will happen, will be caused by God. Try to understand this fundamental truth by an anecdote. Often people tell this story as a joke. But I’ll show you it’s subtle meaning . :

Once a man aboard a train with a heavy luggage. The train was full of passengers & all seats were occupied. It was a mad rush. The man, even after boarding on the train, did not place his luggage on the train but keep hanging it on his shoulders. When other co-passengers saw this, they asked him to place the luggage aside and stand comfortably. The man replied strangely by saying that since the train is already overburdened with so many passenger and luggage, he didn’t want to increase its burden by putting his luggage too on it. On hearing this, all other passengers laughed and told him,” Dear friend ! even if you hang your luggage on your shoulder, the truth is that you and your luggage are very well on the train and thus the weight of both you and your luggage is contributing to it’s burden.

Well the above is a joke. But take a look at this anecdote from the following perspective.

The man who boarded on train was an enlightened soul. When co-passengers asked him to place his luggage on the train and relaxed, he replied in the same way by saying that he didn’t want to overburdened the train. All passenger start laughing and say that even if he kept the luggage on his shoulder ,the combine weight of both will be on the train and train will remain as overburdened as it would be if you put you luggage on it’s floor. When the man listened this advice from co-passengers, he started laughing and said,” I was thinking that you all were just common people. But it appears that you all are very knowledgeable fellows.

You are right when you say that even if I don’t place my luggage on train and keep hanging it on my shoulder, it is ultimately the train who will have to bear the weight of both. But don’t you think the same logic applies to life also ? You live in the illusion that your burden of responsibilities, difficulties and tensions is being dealt with by yourself. Whereas the stark reality is that even if you don’t leave your difficulties & sorrows on God, it is still God who will have to bear it. After saying this that man removed his luggage from the shoulder, placed it’s on the train and sat on it.

If we observe this world, if we see the life around us, we will find that almost 99% of things in the world are happening on their own. Human civilization with all its technical progress and with its power to think and create is definitely affecting the way this world works. However, all the changes that it has been able to make could have never been possible with out the active help of all those factors which are still beyond our control.

The earth is moving on its axis in a definite and precise manner without taking a pause. All type of weather – summer, winter, autumn & monsoon etc come at regular interval annually, the regular rain provides our farmer enough crops to feed the world, the ozone layer and other various life supporting gases such as oxygen are present in optimum quantity and supporting the life.

Sun, the provider of warmth and light is burning with a comfortable intensity. It is neither too hot nor too cold and thus is giving us with just right amount of warmth and light. There are continuous platonic shifts on our planet but none is  too fast or too violent to cause immense causalities ( if you see it from a broader perspective, even the tsunami disaster that came in 2004 does not come into the category of what we called a catastrophe of global proportion. Though there have been many unfortunate deaths, our planet as a whole is secure and at least for the time-being the earth is not in a danger of extinction ).

In short there are so many situations  like above which in conjunction with each other are helping human race to sustain and grow. All these activities are beyond our control but are extremely important for our survival. According to Bhagavad-Gita these actions comes under the class of ‘Vi-karmas’ (Vee’ Karmaa’s) or ‘ those actions which are caused by cosmic choreographer. There source in unknown but there preciseness and regularity left us in awe and amazement !

On a more personal level also, this truth of cosmic choreographer can help us immensely. Gita says that there are broadly 3 types of Karmas (action)

(a) Karma – Everything that we do, every action which we perform, can be termed as Karma if….

If we do it with the feeling of a doer. If you perform an action with the feeling that you ‘as a doer of that action’ are doing it then it is a Karma. Normal mundane tasks like supporting a family, doing a job, playing, watching TV, building a house, running a shop as well as the so called ascetic action of renouncing the world, taking Sanyas, breaking all relations with past life are also known as ‘Karma’ if done with the sense of a ‘doer’. They are all Karma.

(c) Vikarma – This is the third category of action. There are many things which happen on their own. Just like the huge natural phenomenon of revolution of earth, arrival of weather etc, if we observe from a physical human level – the beating of heart, the breathing of air, the circulation of blood in body etc are all actions which are happening on their own. Our heart does not ask us, “would you like to pump me? it just goes on. Our blood does not ask us for circulation, it just flow on its own. The same is true for breathing, we may regulate our inhalation and exhalation but certainly we can’t control it. It’ll continue on its own.

The message of Gita :

To put it simply – Observe your life carefully, contemplate over it,  evaluate your experiences and you’ll find that everything is in the hand of cosmic choreographer. Realize this truth and align yourself in this cosmic flow. Surrender yourself into this huge game.

It’s only a matter of perspective. Just be a little analytical in your observation. You’ll amazed to find that almost everything in your life is beyond your control .

So what is the lesson ?: When nothing is in your control, why become tense and stressful by trying to control things. Why not we all perform our task with the best of our capabilities and leave the rest on ‘Cosmic Choreographer’ to decide ?  Let the existence do what it wants. Just be in the flow.

Best actions are those which are done without feeling of a doer:

I know that there is nothing new in what you just read above. Many of you may feel a feeling of deja-vu.  However, the fact is that eternal truths are same everywhere. They don’t change. They are as relevant today as they were thousands of years ago.

Try to make all your actions  Akarmas : the actions which are done without a feeling of the doer. All these actions  will make us more free, more playful, and more calm.

Don’t do anything with the feeling that you are doing it yourself. Just be an instrument in the hand of existence. Let it do what it wants to accomplish through you. This cosmic play is going on. We may choose to be playful with it or we may choose to fight with it. Be a little meditative. Be still and know. We all are puppets in the hands of cosmic strings. So let us surrender ourselves to this existence. No matter who we are, where we are, what we are doing, let us do it in a non-attached manner. Only one thing is required – A firm faith in the cosmic play, A belief in existence.

Jumping into the unknown appears a risky and insecure step. but sometime an open insecurity becomes the safest place. Just for once – Stop fighting with your fate, with your circumstances. Accept the world as it is. Believe in existence, be still in meditation and stop doing anything by placing yourself in the center. Put aside yourself and let the existence do what it wants to do through you. You’ll amazed by the inner peace you’ll got from this.

A very important article on this theme has been written by ‘Peter Russell’ of www.peterrussell.com  . It tells us how to be a wizard. Though there is no mention of Bhagvad-Gita, but for somebody who wants to practically apply the lesson from Gita in his/her life- this article is worth reading,

Gaia : Is earth alive
Isa Upanishad -Everything is God