You are here: Home › The heartbeat of a cell

(Originally published in the Cubed column of http://www.britishcouncil.org. At present not available on the site)

‘Life is the movement of electrical charges from one cell to another’, says Professor Andre Geim, the man leading the University of Manchester team in measuring the electrical activity of a living cell. 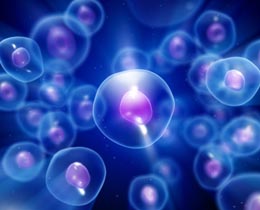 Individual biological cells survive by transferring electrically charged particles, called ions, across their cell membranes. This flow produces an electrical current that could be detected with sufficiently sensitive equipment.

Professor Geim’s team has set out to capture this cellular ‘heartbeat’. Producing a ‘cellular cardiogram’, much like a heart cardiograph, would allow doctors to monitor the healthy function of cells and provide a safer way to test drugs.

Cell’s last gasp
Measuring the electrical activity of the heart and brain is an established medical procedure, but detecting normal cellular electrical activity at a micro-level is still a major challenge. The team adapted a technique, normally used for detecting weak magnetic fields in superconductors, to studying a single yeast cell in a liquid environment. This is the first time this approach has been used on a living cell.

To enhance the electrical signal the team added ethanol, similar to vodka, which increases the transparency of cellular membranes and enhances the prospects of a measurable signal. As soon as the yeast cell had a sip, the probe registered an electrical signal. ‘It was probably the last gasp of the dying cell,’ says Professor Geim. The ethanol had poisoned the cell.

The electrical signal is the smallest detected from a living cell, around 100 times smaller than anything previously measured. It added up to an electrical current of just ten moving electrons.

‘We already have ideas about how to improve the sensitivity of the detector in water and next time we will also use a more active micro-organism such as an amoeba. Yeast is a subdued organism and doesn’t generate much activity,’ says Professor Geim.

Health safeguard
‘The next stage is devising a technique where the cells survive. Once we know the average or usual pattern of electrical activity in a cell, we can see how different drugs affect it,’ he says.

The electrical activity test would be an early safeguard in drug trials and could also help to monitor the effects of pollution on naturally occurring micro-organisms in the environment.

Back to : The Concept Behind Binaural Beats