You are here: Home › How Meditation Started 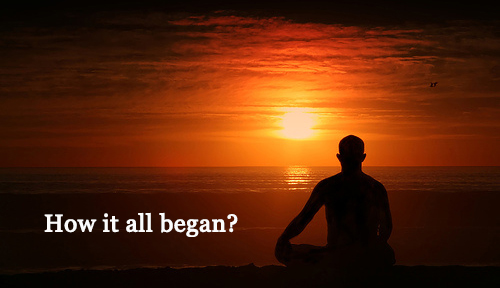 In order to understand  meditation properly and to learn  to meditate, it is important that we know how meditation started . Let us acquaint ourselves with the concept behind the origin of meditation.

Ever since the advent of humanity on earth, there are some questions that have kept bothering  men of every time and era. Like who created the universe? How life came on earth ? What is the purpose of life? Why do we born and die? Is there any systematic plan behind all this or is it happening on its own ? The question ‘who made this universe’ has always raised curiosity among men of all times.

If you don’t now how to find a solution, the next best thing is to try to understand the problem from all angles. Often an honest effort to understand the problem itself can facilitate its solution. Therefore, a search on this line began in the world. To find the answer of the question ‘who created this world?’  people started finding some clues in the creation itself.

In this endeavor of finding some clues about the mystery behind Universe, two approaches were adopted.  Firstly, there were groups of people who started looking for clues in the outside world. They went on discovering laws of nature, finding its various phenomena, inventing wonderful  gazettes, machinery and electronic devices etc. Their entire research on the external world  gave rise to science. Their constant endeavor resulted in unfolding of mysteries behind nature’s physical and biological laws. The development in science and technology around us that we see  today is the result of the constant endeavor of such people. This ongoing research to unleash the secrets of nature is still going on.

But, apart from these seekers who tried to find the truth in the external perceivable world, there were another seekers who thought in a different direction.  These people were of the opinion that if some creator has created this world, then the same creator must have also created them. So, in a way, they should also be a part of this creation. So instead of going deeper into the depth of outside world why not go within themselves and look for some clues, some hints there ? So they started experimenting on themselves and got involved in inventing various methods for going within. This endeavor of going within gave rise to meditation and later to religion. ( Now that’s a different thing that today religion has become more dominant and meditation – which gave rise to all religion- has become a small part of it.)

In ancient times, people used to believe that everything in this world was made up of five elements – earth, water, air, fire and space. Then scientific advancement began and as more and more discoveries came into light, it was found that the whole universe was made up of 108 elements. However, after going into the inner intricacies of these 108 elements, it was found that all elements were same and were  made up of atoms. The difference in elements is because of the arrangements of atom in them. On further research, it was found that even atom was not the basic unit of everything. It was rather electron which was the building block of everything. However the discovery of electron gave rise to a difficulty.

Electron, though considered as the smallest unit of particle, does not fully exhibit the nature of a particle. It is neither stable nor unstable. It is moving as well as not moving. Sometimes, it acts like a wave and sometimes it behaves like a particle. It was very difficult for scientists to exactly define the nature of the electron. Therefore, a new term was coined – “Quantum” -dual , the one having properties of wave & particle simultaneously.

But as more and more researches on electron are being done, it appears that at a very subtle level, electron is nothing but an infinitesimal energy particle. It is the energy which transforms itself into electron and subsequently into matter. The famous equation of Albert Einstein, E = MC2 also reinforce the fact that all matter and energy are interchangeable into one another.

Let me come again to those  people who adopted the  second approach of going within, They started researching on their body. They moved their attention inwards and started developing techniques of penetrating deeper into their inner existential identity. These efforts gave rise to meditation. All the meditation techniques and yogic exercise are result of this endeavor taken by millions of those avid curious people who dared to go within.

Now let us see whether you can meditate or not.

Knowing the Knower
Anybody can meditate