You are here: Home › Remembering Steve Jobs….
By Eklavya on October 6, 2011 in contemplation 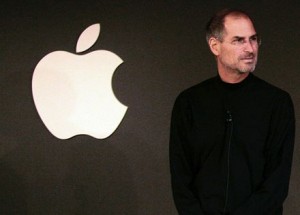 It is a sad news for all of us.  One of the most intelligent,  inspirational, loved, discussed and admired technology leaders of our time – Steve Jobs is no more.

After battling a long fight with cancer, he breathed his last yesterday. It is the end of an era. A visionary who changed the lives of millions through his remarkable Apple products has gone into the eternal sleep.

May his soul rest in peace.

Here are some motivational golden nuggets uttered by this great man during his lifetime :

“Being the richest man in the cemetery doesn’t matter to me … Going to bed at night saying we’ve done something wonderful… that’s what matters to me.”

“Be a yardstick of quality. Some people aren’t used to an environment where excellence is expected.”

“The only problem with Microsoft is they just have no taste. They have absolutely no taste. And I don’t mean that in a small way, I mean that in a big way, in the sense that they don’t think of original ideas, and they don’t bring much culture into their products.”

“We made the buttons on the screen look so good you’ll want to lick them.”

“You can’t just ask customers what they want and then try to give that to them. By the time you get it built, they’ll want something new.”

“Why join the navy if you can be a pirate?”

“A lot of companies have chosen to downsize, and maybe that was the right thing for them. We chose a different path. Our belief was that if we kept putting great products in front of customers, they would continue to open their wallets.”

“Innovation distinguishes between a leader and a follower.”

“People think focus means saying yes to the thing you’ve got to focus on. But that’s not what it means at all. It means saying no to the hundred other good ideas that there are. You have to pick carefully.”

“We don’t get a chance to do that many things, and every one should be really excellent. Because this is our life.
Life is brief, and then you die, you know?
And we’ve all chosen to do this with our lives. So it better be damn good. It better be worth it.”

“Here’s to the crazy ones, the misfits, the rebels, the troublemakers, the round pegs in the square holes… the ones who see things differently — they’re not fond of rules… You can quote them, disagree with them, glorify or vilify them, but the only thing you can’t do is ignore them because they change things… they push the human race forward, and while some may see them as the crazy ones, we see genius, because the ones who are crazy enough to think that they can change the world, are the ones who do.”

“Your time is limited, so don’t waste it living someone else’s life. Don’t be trapped by dogma – which is living with the results of other people’s thinking. Don’t let the noise of other’s opinions drown out your own inner voice. And most important, have the courage to follow your heart and intuition. They somehow already know what you truly want to become. Everything else is secondary.”

“Innovation has nothing to do with how many R&D dollars you have. When Apple came up with the Mac, IBM was spending at least 100 times more on R&D. It’s not about money. It’s about the people you have, how you’re led, and how much you get it.”

“I’m convinced that about half of what separates the successful entrepreneurs from the non-successful ones is pure perseverance.”

“I would trade all of my technology for an afternoon with Socrates.”

I think this was his best:
“I want to put a ding in the universe.”

Thanks Steve for making our lives better !

Life Lessons from Steve Jobs
Life cycle in a picture
How to cope with shattered dreams ?
What it means to be successful?
A good article on Meditation

Keep in touch by following us on your favorite Social Platform

Why you can’t learn meditation?
Meditation Quotes Widget is Now Back….just like me

In the today's fast paced world where our mind is bombarded with thousands of things to do and as if like a mechanical robot- our life is whirling in a vicious circle of responsibilities, dead-lines, commitments and what not- this website is a small attempt to give it a chance to slow down a bit. To see the world as it is evolving, to learn to take the notice of the smile of a child, the flowering in a plant, the blackness of the cloud, the sparkle in the water drops - all things we used to do as a child.