You are here: Home › How to adopt a habit of Deep Breathing : Two Easy Methods 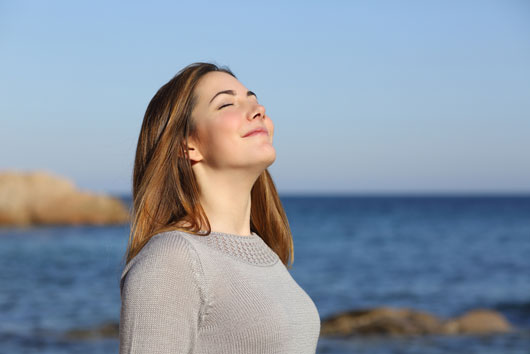 Deep Breathing : It can be natural

There are many benefits of Deep breathing. However, very few of us are able to draw  these wonderful benefits for the simple reason that most of us breathe in a staccato jerks, shallow and aimless manner.

We have become so used of this shallow breathing that it seems very natural to breath in this aimless way. Since barring a rare few among us, almost everybody of us breathe in this shallow manner, it is difficult to believe that we can easily adopt a continuous, unconscious habit of deep breathing very easily.

Whenever we give attention to our breathing and make some conscious effort to lengthen it, we easily  start breathing deeply. However, as soon as our mind wanders in some other mental activity ( i.e. as soon as we become unconscious of the breathing process which happens almost always), we return to the ‘shallow breathing mode’. This  is the main problem among those who want to make deep breathing a part of their life.  Let us discuss this problem and then its remedy:

” We have an habit of shallow breathing. As a result of which we are not able to inhale enough oxygen and exhale enough Carbon Dioxide from body. This  resulted into a situation known as ‘permanent oxygen starvation’ resulting in ‘permanent lack of energy’ ”

This problem is very old and has been rooted very deeply in our unconscious mind. Since we spend most of our time totally oblivious of the breathing process (which goes on its own just like other vital activities of body such as pumping of blood by heart, the digestion and other internal metabolism  etc ) it is difficult to change  this unconscious  process of shallow breathing. However, it is not impossible and can be done easily if we make some sincere effort for it.

Here I will tell you how you can learn to assimilate on a permanent basis the habit of deep breathing so that you can breath deeply even in the unconscious state.

There are two methods by which you can learn deep breathing : The first is Pause Breath Method and the other is Pavlov Method

Both the above two methods are equally effective and useful in learning Deep breathing. We shall learn them one by one.

Mantra Meditation : The power of repetition of sound

How to use mantra meditation in a busy & complex life

Some Mantras for Meditation